Collaboration: Ideas After the Acting Class 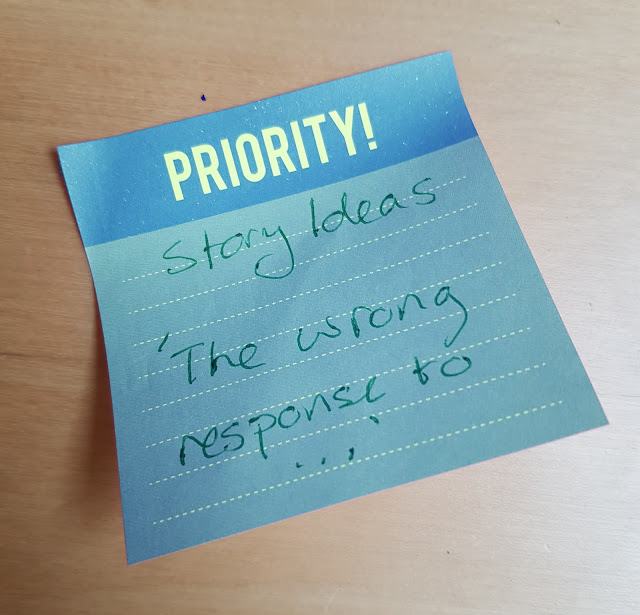 Here are the ideas that we worked on during the acting class with Dan. We focussed mainly on 'The Wrong Response to Death'. I have quickly written these out for now and we will work further on specific movements and a more resolved script outside of class.

The Wrong Response to Death:

Granny sitting in her living room, fussing over tea set, seat and photo album.
Pan around to see Death approaching the door and then knocking ominously.
Granny rushes to answer door and after a small pause adjusts her glasses.
Death raises a finger to point, very close to grannies forehead.
Pause.
Granny grabs Death's hand and kisses it, before fussing over him.
She grabs Death's scythe and rushes off screen to place it next to the chair she was fussing over earlier.
She returns and beckons Death inside, tottering around him in a circle, exclaiming over his height, he seems annoyed.
She then stares up at him expectantly.
CUT
Granny showing Death the photo album, he holds a cup of tea and seems very bored.
CUT
Granny putting a blanket over death, he looks aggravated, incredulous.
Granny turns out the light and totters off.

The Wrong Response to a Kisscam:

A kisscam is pointed at a man and a woman at a football game.
The man looks hopeful and turns to kiss the woman, the crowd around them leans in anticipating.
Pause.
Instead of kissing the man the woman bursts out laughing.
He looks hurt and she continues to laugh, the crowd are shocked.
CUT
The woman is laughing so hard she slips off her seat.
The man shrinks in on himself and the crowd are mostly focused on the game, with one or two people glancing at the not-couple.
The woman pulls herself back on the seat, fanning herself, she calms down and turns to look at the man.
Small pause.
She starts laughing again, the man looks dismayed.
CUT
It is now dark and everyone but the man and the woman has left.
She is still laughing.
The man gets out of his seat and edges away.
The woman continues to laugh.
END

The Wrong Response to a Hair Disaster:

A woman sits at the hairdressers with a hair drying helmet on, reading a magazine.
There are other women around her, dressed in drab clothes, some have rollers in their hair.
The hairdresser comes and starts to remove the helmet and she puts her magazine down, seeming excited.
CUT
The helmet comes off and there is a huge frizzy mess underneath, it is very unlike any of the other hairstyles in the room.
The hairdresser looks mortified and the other customers are sneering and shocked.
The woman seems ready to explode.
CUT
She shoots her arms out and exclaims with joy! She becomes very colourful.
She dances around with happiness as everyone else looks confused.
She shakes the worried hairdressers hand and bounces about.
END

We also have an idea that is set at an Art Gallery and a dead insect on the wall being mistaken for art, but this was not fleshed out as much, I have written out my interpretation of this idea, but don't yet have a title.

A janitor is sweeping at an art gallery.
He sees a mosquito and chases it around, through the guests and art, eventually splatting it against an empty space on the wall.
He looks at the mess and tries to scrape it off but just smudges it so it is bigger.
He steps back worried as someone comes along and stares at the dead insect, but they just nod at it and move along.
CUT
There is now a large crowd around the 'art', taking notes and photos, murmuring excitedly.
The janitor has returned with some cleaning supplies, he edges through the crowd to get to the insect.
CUT
The janitor awkwardly cleans away the mess and there is pause as he stares at the crowd and they stare it him.
The crowd then bursts into applause, thinking that this was all part of the 'art'.
END